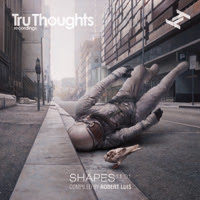 Throwing shapes. Making shapes. Whatever. For me, the word 'Shapes' will forever be associated with semi-regular lable compilations from Brighton-based independent Tru Thoughts. For the past wee while they've been putting out often double-disc (and recently on vinyl, too!) selections of tunes old and new; and 2011 is no different, with co-owner Robert Luis again compiling a bespoke collection reflecting the label's eclectic musical vision. Brand new signings (Mark de Clive-Lowe, Anchorsong, Benji Boko) nestle alongside old hands (Quantic, Kinny, Hint), plus all sorts of other goodies, including previously unreleased tracks (which are actually quite good, not just outtakes), new remixes and guest appearances from Aloe Blacc, Bembe Segue, Tawiah, Skream and Mark Pritchard. Shapes 11.01 is divided into two discs, and disc one is the clear winner in terms of sheer "listenability". Standouts include Lanu (aka Bamboos' main-man Lance Fergsuon) and Megan Washington's quirky Roosevelt Blues; Belleruche's classy, stripped-back dancefloor-pleaser Northern Girls; the effortless soulful pop of Lost Baggage, from Kinny (currently working with De La Soul on their next single); Portada Del Mar, my faourite track from the Quantic Presenta Flowering Inferno album Dog With A Rope - plus Dr Dre re-interpreted cumbia-style with Nuthin' But A 'G' Thing given a radical rework by Quantic Y Su Conjunto Los Miticos Del Ritmo. All of this alongside the hazy glitch of Anchorsong's Plum Rain and the thrust and impetus of Hidden Orchestra's duelling drummers on Dust; while, elsewhere, Tawiah teams up with Maddslinky for the future funk twist of Hiding Place, Tenor Fly adds toasting style vocals to Smerins Anti-Social Club's mad reggae version of the Dr Who theme, and Anthony Mills and Freddie Cruger's hit-and-miss Wildcookie collab contributes one of their better tracks with Serious Drug. Even if it purports to be more mellow, CD1 really is an absolute belter of a selection. Standouts on disc two feature Bembe Segue and Nia Andrews adding funky, gritty prettiness to Push (itself one of Mark de Clive-Lowe's most complete pieces of tough future funk from his recent Renegades album); a trip back to Lanu's self-titled debut album for Tru Thoughts with the funky breakbeat of Mother Earth, featuring Quantic (guitar) and Aloe Blacc (vocals); J Boogie adding a little club-flavoured beat-spice to Quantic and His Combo Barbaro's already fetching Un Canto A Mi Tierra; electro-styled bleep-funk courtesy of Beta Hector and their Jupiter Mission - which sounds exactly as the title suggests; a mad mash up of glam synth funk and dubstep with glitch-tech via dancehall on speed, thanks to Be Electric, from the also appropriately monikered Randomer; and Maddslinky and Skream seriously upping the wobble-factor with 50 Shades Of Peng. Disc two, while inarguably fresh and exciting, is perhaps just a little too ambitious and varied in its musical spread to consistently please these ears - but that could be splitting hairs. Either way, the "future music" found - particularly on the second disc - on Shapes 11.01 brings not just freshness and excitement, but also a certain sense of balance, to what is ultimately yet another compelling collection showcasing one of the most thrilling independent music labels ever to really give a shit.

Check out the Tru Thoughts site and sign-up to their newsletter too!
Posted by Your Bro 90 aka David Carroll at 12:45 PM