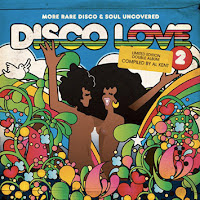 According to his biography, an eight year old Al Kent ran away from his Scottish home to party in New York at The Loft with Nicky Siano, only to be deported back to Glasgow just two years later thanks to being caught in possession of PCP. He then promptly opened a nightclub in his hometown and had Walter Gibbons DJ the opening night. While much of that may well be a steaming pile of codshite, his newly released mix of rare disco and soul on BBE titled Disco Love 2, most definitely is not. Each and every tune here is an absolute floor-filling winner, and most are exclusive, painstakingly assembled edits put together by Kent himself. From backstreet crack-house recordings to uplifting dance floor gems, deep soulful and funky disco music abounds. No wonder he's the favourite disco DJ of Dimitri From Paris, Joey Negro and, why not? - me too.

Check out www.milliondollardisco.com
My review of Al Kent's Best Of Disco Demands here
Posted by Your Bro 90 aka David Carroll at 5:00 PM