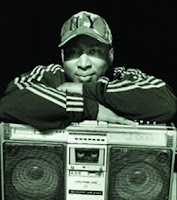 WHAT IS HIP?
MARC MAC INTERVIEW

"The connection is from my own roots of hip hop."

Marc Mac is speaking about the links between his new Visioneers album Hipology and their feted debut Dirty Old Hip Hop; and for the UK musician and producer who is otherwise known as Mark Clair, those roots go well deep - though not just in hip hop.

Launching the now legendary Reinforced Records label back in 1989, Mac went on to involve himself in many landmark moments in recent UK music history, including a stint on Kiss FM, entanglement in the West London broken beat scene and a Mercury Music Prize nomination for his ground breaking work with 4hero (a group he co-founded); while having a hand in the release of quite literally hundreds of records.

The Visioneers is the name of his latest studio project, alongside longtime musical collaborator Luke Parkhouse, and they've just released their second album, Hipology. Also featuring the vocal talents of a handful of guest emcees, Hipology sees Mac and Parkhouse create a sort of homage to, or reflection of, the classic hip hop sound back from when it all began - and Mac sees both albums as pieces of the same puzzle.

"They both have a background in hip hop, definitely," he claims, "But whereas the first album was more influenced by modern producers, this is taking it to what I class as the original themes behind hip hop, the break beat era of hip hop."

This is evident in the album including a couple of lovingly re-worked covers of tracks recognised as building blocks in shaping hip hop culture - Apache and Shaft In Africa (Addis).

"Most of the projects I've been working with like 4hero or whatever," he says, "I have this habit of trying to continue a theme; somehow I want all my projects to link in some way."

The links between Hipology and Dirty Old Hip Hop may not be as obvious as those to some of 4hero's material, particularly on tracks like LuAnne From Harlem. Turns out there's a reason for that.

"I allowed myself to do that with this album because I was doing cover versions, so I wanted to do something in the style of 4hero," he says, laughing, "But also sound-wise as well - this time I was quite meticulous about the sound and the instruments, and that's something I generally do with 4hero."

One of the central themes of Hipology is that it's not only traditional hip hop culture which may inform our understanding and response to the music. Mac argues (and quite convincingly on the accompanying website) that hip hop can mean different things to different people - and that's actually OK.

We only need to delve back into Mac's musical history to see that point illustrated beautifully.

"We started Reinforced back in 1989, and the truth is it was out of frustration with what was happening with the UK hip hop scene at that time," says Mac, "There was this thing where the majors were all interested in UK hip hop, and signing kids up for small budgets and then basically shelving them. They didn't know what to do with these tracks, or with these artists. I wanted to start a label to say 'well look, we can do whatever we want and put it out ourselves' and not rely on the majors to put a record out."

Yet in trying to open an avenue for UK hip hop, Mac inadvertently opened the floodgates for a new style altogether.

"The first record on Reinforced was basically a hip house record," he recalls, "It was hip hop but I was aware that the tempo needed to be faster and I wanted it played in raves, dances and those kinds of places. So that was how it started; and then Reinforced became like a foundation label for a lot, if not most of the UK's drum and bass scene, the jungle scene."

He's really not overstating the role he played in advancing what became known as Jungle, and eventually as Drum and Bass, though perhaps it didn't initially start out that way.

"A lot of records were coming out of Reinforced, like you had Manix, Tek9 and loads of different names, but basically all those names were just between the four of us who was 4hero and Reinforced Records at the time," Mac chuckles, "There was always aliases because we didn't have a roster, but we just tried to make people believe we had a roster!"

While we did chuckle about this method of building a roster and catalogue, there was also acknowledgement that starting a label in 1989 was an entirely different proposition to doing so in 2012.

"I wouldn't  want to be in the position of trying to start a label now, trying to sell music now," states Mac, "Even with Hipology, I had on my facebook saying that releasing records now is like throwing needles into a haystack!"

"It's a deep sea, because of the whole digital music thing, and everyone that has a phone with an app on it can make a tune and upload it to iTunes, and iTunes don't care, they just want to get more product on, so..." Mac pauses, seemingly offering a verbal shrug, before changing direction slightly.

"I would complain back in the day about white labels, saying 'oh, everyone's got a white label!', but you have to spend some money to get that white label! You probably had to have a budget of 500 to 1000 pounds to make a record, so in some ways you had to be serious about it. Now you can have an app and you're there!" he laughs again, "But a lot of people sound bitter about the industry and I don't want to, as it's not that. It's just that we've been around through all the different stages and can make an honest statement on it, and that's just that it's sad at the moment."

I put it to Mac that there are still kids coming up who have a hunger for musical knowledge, just as we did when we first discovered music - only the tools for exploring have changed radically.

"Definitely, definitely," agrees Mac, "We had pirate radio stations back in the day and when we was coming up they were vital to everything. It's important to pass down knowledge. There were people like us that were prepared to listen and learn and read then, and I know that people are now as well, we've just got to pass the information on."

I had one final question for Mac, and it revolved around the broken beat sound, which appears to have slipped away without much of trace - or has it? Where has broken beat gone?

"Good question!" Mac laughs, "I think it's been filtered into house music, especially house music from the UK, because nowadays I go into clubs and I hear elements of the broken beat in there. Instead of people just keeping the straight four/fours, they're shuffling it a bit more and putting in something a bit more offbeat."

"Broken beat was a sort of melting pot music, and it' almost like melted back into the pot in some ways!" Mac laughs again, "I think it's gonna be one of those great things, like in ten years' time, when people find a pocket of that era and think 'wow, look at all these great songs', it's gonna be like a lost civilization, found again. It's like what happened to the Mayans is gonna happen to broken beat!"


Check out my review of the Visioneers' album Hipology here.
Posted by Your Bro 90 aka David Carroll at 6:27 PM