Review: Sola Rosa 'High And Beyond, Low And Behold' 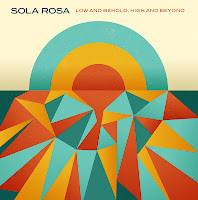 SOLA ROSA
Low And Behold, High And Beyond
[Rosa Recordings]

During the late '90s I was managing a music retail store in Auckland's Queen Street when an only marginally older Andrew Spraggon showed up hawking a box of CDs. I was vaguely familiar with him via local post-rock outfit Cicada, but the Starter For 4 EP from his brand new Sola Rosa solo project was not what I was expecting: "Kind of like spaghetti western hip hop", I vaguely recall him telling me. I paid for the CDs using money from the till without telling the boss - and, thankfully, we went on to sell many, many more copies. Time has passed, I'm no longer in music retail and Sola Rosa has been going from strength to strength. Low And Behold, High And Beyond is their fifth album, and one which sees them now more than ever functioning as a group rather than a solo project. There have been other changes since those early EPs too: where they certainly inhabited that space Spraggon described to me initially, their last album Get It Together and the new album both seem to have been geared towards the masses. This is slickly produced and cleverly arranged soul and funk music with its head in the clouds of pop music, and just enough rough edges to keep the listener intrigued. With Low And Behold... Sola Rosa have delivered an album of consistently high quality. Besides a rollcall of guest musicians, there are also a handful of guest vocalists involved, with locals LA Mitchell (who appears on three tracks) and Ned Worboys, and internationals Olivier Daysoul and Miles Bonny appearing, alongside regular contributor Spikey Tee. Daysoul provides two of the albums' many highlights with the opening track Promise (which you can check out below) and the obscenely funky Wiggle, while Mitchell proves she's worthy of the hype with a fantastic performance on the closing track Loveless. Interestingly, the other highlight is the album's sole instrumental, Lion's Den, which just goes to show Spraggon and his band are well capable of making a glorious racket all on their own. Still mad decent after all these years.

Check out the album-opener, Promise, featuring Olivier Daysoul, right here. And I encourage you to dig a little deeper - and purchase a damned copy...

You can also check out Sweetpants and I speaking about Low And Behold, High And Beyond on the radio, for the Radio Ponsonby Record Review, on Murry Sweetpants' Breakfast Show, The Long Black...