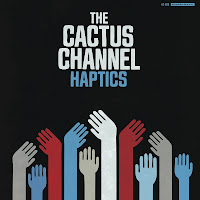 Raw, unadulterated funk seems to ooze out of Melbourne like some kind of primordial soup. Or there's something in the water, at least; because, while Australian hip hop is truly stuck in a quagmire, Aussie funk music is on another planet. As if further proof was required, young (like, still-in-their-teens young) 10-piece band The Cactus Channel,  hailing from Melbs, have just released their debut album, Haptics. Real and nasty instrumental funk and soul music, recorded straight to analogue tape and with little regard for anything other than getting a crowded dance floor hot and sweaty, Haptics is a rough and ready (1970s movie car-chase scene) ride through hard funk, swingin' boogaloo and deep soul. Yes, at times this is jarring, with blaring horns relentlessly rubbing against the grooves laid down by the loose-limbed rhythm section; but it is also endlessly exciting at the same time - exactly how funk music should be. And to be fair, hearing this music played in a live environment, while jammed into a little room with a cluster of like-minded folks, with a beer in one hand and your girl in the other would be something else. Bands like (countrymen) The Bamboos and NY's Dap-Kings and The Menahan Street Band spring to mind, as do Eddie Bo, The Blackbyrds and The J-Bs; but this is more than a pastiche - it's a clever amalgamation of a handful of different funk and soul styles, which keeps the listener's attention throughout, with all the right boxes ticked: big fat horns, scratchy guitars, thick layers of keys and bass, heavy-handed drums and some fantastically arranged tunes. All up, a remarkable and impressive debut.

Have a listen to the album below or at this link. I recommend it.


The Cactus Channel - Haptics by HopeStreet Recordings
Posted by Your Bro 90 aka David Carroll at 5:50 PM