Review: Breakbot 'By Your Side' 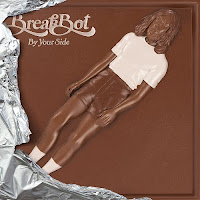 BREAKBOT
By Your Side
[Ed Banger/Warners]

The front cover of By Your Side depicts Breakbot aka French producer Thibaut Berland as a partially unwrapped bar of chocolate, and his debut album crammed full of French funk, pop and sugary soul certainly falls into the "guilty pleasure" category. Sounding at times like Daft Punk or Crazy P or Phoenix or even Prince - though, admittedly, a slimmed down, low-fat kinda version - the album is enjoyable enough, it's just that almost every song sounds "like" somebody else. The title track sounds like Chromeo. One Out Of Two sounds like Hall & Oates or Supertramp. Fantasy sounds like Justin Timberlake doing his best Michael Jackson impression. Frankly, anything that guest vocalist Ruckazoid touches sounds like that, but perhaps that's part of the album's sweet treat charms: familiarity. Or at least enough familiarity to keep ears piqued, as there are a handful of tracks (Break Of Dawn, Intersection, Programme) which stray a little further into "interesting" territory - though these are all instrumental tracks, funnily enough. Programme is probably the most left field, which possibly says something about which area of the road this album is targetting. There are a couple of singles which have been fairly thrashed round these parts (Baby I'm Yours in particular), but the long and short is that Breakbot's debut album is chocka with music that's here for a good time, not a long time. Mind you, who can resist dipping back into a guilty pleasure now and again...?

Check out some album snippets in the player below, or the full album here.

breakbot - by your side (album preview) by experimedia
Posted by Your Bro 90 aka David Carroll at 10:17 PM