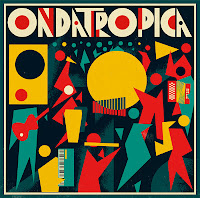 Many of us mere mortals fantasise of following our dreams, throwing in the tools and breaking the shackles of modern life for something more exciting, more challenging. Something more real. Some of us don't dream, they just do. One of those people is Will Holland, Better known as Quantic. Some time back (after releasing about twelve albums in the space of seven years) Hollands followed his deep interest in the music and people of South America with a number of visits, before moving to and deciding to live in Colombia. He is now fully ensconced and has released a number of albums, with a mixture of local and guest musicians, as Quantic and His Combo Barbaro, and Quantic Presenta Flowering Inferno. On this occasion though, Holland has teamed up with Mario Galeano, the brains and power behind Colombian band Frente Cumbiero, to present Ondatropica. The project is an ambitious one, putting together in the famous Discos Fuentes studio in Medellin some of Colombian music's most legendary figures with young players from both Holland and Galeano's bands and asking them to represent both the classic and modern styles of Colombian music. Ambitious, yes, but ultimately, successful. There is a ahuge amount of music to digest in one sitting, but taken piece by piece Ondatropica is a rambling, sprawling triumph, and a credit to the spirit in which it was recorded. Lovingly released by those good folks at Soundway Records, Ondatropica is highly recormmended for summertime listening, dancing - and maybe even dreaming.

Check out a couple of cuts from Ondatropica in the player below, or via one of the many links above. You can also watch a "making of" film here.

Ondatropica by Barbican Music
Posted by Your Bro 90 aka David Carroll at 9:56 PM