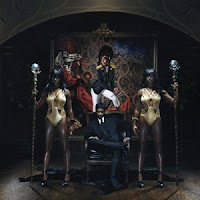 Four years in the making, with only eleven tracks and less than 40min in length, the new album from Santigold, aka Santi White, has been getting critics' backs up all over. Why? It's not immediate enough. There's nothing to compare with her massive breakout hits L.E.S. Artistes or The Creator from her 2008 self-titled debut. It's too short, too safe, too boring. Santi's time has come and gone, as the likes of Nicki Minaj, Lady Gaga and of course M.I.A. incorporate seemingly disparate genres into their great heaving pop music beasts. Really? Really. And what do I think? Well, I think the weight of expectation has caused some serious short-sightedness from my fellow scribes, as Master Of My Make Believe is every bit as strong an album as Santogold - if not better. Really. Yes, it is short. No, it's not necessarily immediately pleasing. While the tracks Big Mouth, Disparate Youth, Freak Like Me and Look At These Hoes are cracking songs (and there are others), they're not going to scale the pop chart heights of the singles from her debut. And yes, times have changed, and pop music does now embrace the kind of collage-like stylistic approach which made Santigold's 2008 breakthrough so exciting. However. This is still the equal of that record. Really. Santigold continues to spread her wings stylistically, avoiding the draw of easily digestible choruses or a descent into four-on-the-floor beat making. As you'd expect, there's a grab-bag of dancehall, Afro, Latin and many other rhythms present throughout, while guitars nestle against layers of synths and Santi's versatile voice. Sure, she's never going to win any kind of literary awards, but that was never the point - her first album wasn't lyrically incredible either. No matter. As much as she may lay claim to hate modern dance and pop, that is essentially what she is making - refreshingly new and challenging pop music. Really.