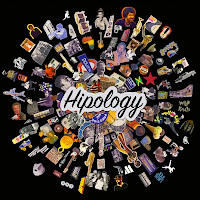 Jazzy. Seldom has a word been used so carelessly and flippantly in labelling a style or sound of music. It remains one of my least favoured descriptive words when it comes to music which isn't jazz. Don't get me started on 'jazzy hip hop'. That's a phrase I've seen used to describe Marc Mac's style previously, particularly with his Visioneers project - who have just released their new album, Hipology. I scorn the term 'jazzy hip hop', because in reality what Mac is doing - is was has always - is approaching hip hop music as someone who has the chops, knowledge and respect to delve into the roots of the sound, referencing the music and lifestyles which formed its basis. Jazz was one of those musics. Mac lived it. And the Visioneers, as he has stated in the past, is about taking jazz music and putting it back in the hands of the hip hoppers. Mac hints at this with the album title, and confirms it with the accompanying website: Hipology is "...a collage or montage of elements, events, music and fashion that make up an individual's personal interpretation of Hip Hop culture." The Visioneers also utilise real live players, with Mac stressing there was "not a sampler in sight" during the recording process. It's this sort of attention to detail which reaps real rewards, as is the case here. Hipology is a gorgeously lush listen, with real warmth and genuine soul seeping through every groove. While there are a handful of vocal tracks, featuring Baron, TRAC, John Robinson, Jimetta and Notes To Self, it's the instrumentals which take Hipology from good to great. Propers to Luke Parkhouse, who once again shares much of the music-making and songwriting responsibilities with Mac, as the playing is immaculate, and the arrangements - including electric covers of Shaft In Africa (Addis), Funky Fanfare, Swahililand and Apache - outstanding. From his early days with Dego as 4hero and now as the Visioneers, Marc Mac has (perhaps not so quietly) been amassing a body of work which must surely mark him as one of his generation's most vital artists.