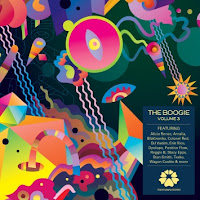 Boogie. A widely mis-used word. Rather like 'disco', which has so many negative connotations it actively scares some folks off using it. The word 'boogie' has many different meanings to many different people. Some music lovers might think of the guitar-led, foot-stompin' 12-bar workouts of ZZ Top or Lynyrd Skynyrd; while some would associate it with the likes of Dam Funk or perhaps Chromeo; while others still would refer us all back to Kleeer or Zapp for some schooling. Consistently strong independent label Tokyo Dawn though, point us in another direction. The Boogie Vol. 3 is a 17-song compilation which assembles a slice of boogie circa-2012, with selections from across the globe (Coco Solid open the comp with Wow). From the J Dilla-esque bounce of Get Up by Rakotep (aka Stacey Epps and Astronote) to Blaktroniks' sultry nu soul number It's All Right Now, featuring a suitably seductive sounding Alicia Rae aka Blue Eyes; from Colonel Red's banging (and almost bruq) The Riddle, to the mad-sounding '80s drum machines and distorted vocals of Erik Rico's epic Electromagnetic; and anything that has Opolopo involved in any way ( !! ), The Boogie Vol. 3 is varied and strong. While there's an undeniable influence of hip hop in many of the tracks, the weirdness and funk shine through and keep the boogie front and centre. Essentially, if spaced-out p-funk, lush vocals and soulful hip hop sounds like your bag, you need to check this. It's boogie, but perhaps not as we've known it.

Check out some snippets from the album below, or go to the Tokyo Dawn site here.