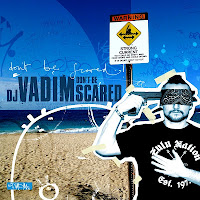 DJ Vadim is one of those artists who has always managed to skirt around the edges of the mainstream without any apparent interest in engaging with it. He's been playing his trade for almost twenty years, initially via his own label, Jazz Fudge, and then through renowned indies Ninja Tune and now BBE. His new record Don't Be Scared, is something like his seventh solo album, and it sits alongside a raft of other work, including joint efforts - the outstanding One Self and The Electric projects among them - and countless remixes, re-works, collaborations and such. One aspect of his career that is without question is his desire to keep pushing his sound forward, constantly looking to the next thing, the fresh approach, the excitingly new. Don't Be Scared is no different - but that's not to say it all works all of the time. There's an incredible array of influences and styles present here, with bass-heavy dubstep and treacle-thick hip hop beats the main basis; but the overall feeling is that this particular pudding has been considerably over-egged. All is not lost, as there are some great tracks on here - Lost My Love with the oustanding Jazz Bailey on vocals, and Set Them Free, featuring Sabira Jade, being the highlights - but even the "merely" good tracks (I'm Feeling You, Lemon Haze) outstay their welcome and the album quickly loses its charm. While I admire what Vadim is endeavouring to achieve, I'm just not convinced he has nailed this one. Don't Be Scared? Don't be disappointed.