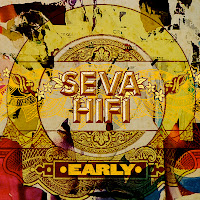 There's a well-known and very successful New Zealand group called Fat Freddy's Drop who have earned the misnomer 'BBQ reggae'. I have issues with this for many reasons - not least that the bands' music is remarkably forward-thinking within a genre that's generally fairly limited in its scope for experimentation - but also because there are albums far more deserving of that label than Freddys' ground-breaking and best-selling debut album Based On A True Story. Like Early, the debut set from Seva Hi Fi, for example. The first release on locally-based label Sugarlicks in five years, Early is a collaboration between producer/Sugarlicks founder Gareth Farry (aka Gmuva), percussionist Levani Vosasi and musician/vocalist Baz Suamili. The three key players blend not only cultures (New Zealand-Lebanese, Fijian and Niuean) but also technologies, with an ambitious mix of traditional Island sounds, analog synths and modern electronica. The high point is undoubtedly the lead single, Pressures Of Life, which has a killer hook and features the vocal talents of Nat Rose. Unfortunately, it's all downhill from there. Early is an inconsistent, patchy affair, with too few moments musically which match the heights of that first single. There are other good songs - Starting Up, Til I Make You Move - but even these run out of steam a minute or two before they actually end. Lyrically it's a little disappointing also, with lazy cliches (who uses the words "struggles and strife" anymore?) and predictable messages of remaining positive despite the 'pressures of life'. However, in an effort to end this review in that same spirit of positivity I can highly recommend Early as perfect fodder for your next BBQ.

Please check out the fantastic lead single from this album right here:

Seva Hifi - Pressures of Life (radio edit) by Sugarlixx Studio
Posted by Your Bro 90 aka David Carroll at 9:46 AM