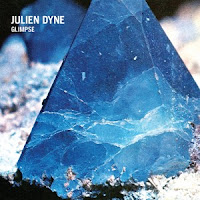 Dilla sure has a lot to answer for. I'm not (necessarily!) saying Dilla was not (one of!) the G.O.A.T., but I am saying he has spawned a helluva lot of imitators and copycats. Most innovators do, right? Sure, but the problem with his signature beat-heavy, vibe-laden, head-nod style is that you need to have an ear for clever arrangement of the elements in order to keep the listener engaged. Dilla did it brilliantly. Others? Not so much. Julien Dyne? Most of the time, yes, and sometimes with aplomb. Glimpse is Dyne's second full-length solo album, and while it's certainly an exciting progression from his debut, Pins & Digits, it is a continuation of the same feel. It it ain't broke, I guess. Don't get me wrong, he does this style better than most and there are some killer cuts here, like the standout Borritoe, with its rich, shimmering layers recalling Tortoise at their most gorgeous. Others like Koln3 benefit from a straight-ahead groove and monster bass line, while Inner Duplex 2 slides eerily by like some kind of futuristic funeral march for abandoned Atari consoles. Almost midway through Ernst (Rutherford 121) offers a welcome tempo change, but is followed by Rago, Creebin' and Looseends, all of which - as likeable as they most definitely are - provide strong evidence Glimpse works better as a collection of beats than as an album. Having said that, guest spots from vocalists Ladi6 and Parks, Mara TK (Electric Wire Hustle), She's So Rad aka longtime Dyne collaborator Jeremy Toy (Opensouls) and Claire Duncan (Dear Times Waste) add a unique colour. Though there are nineteen tracks in total, the longest doesn't breach the four minute mark and the whole thing's over within fifty minutes, but - and you knew there was a but coming, didn't you? - I'm still left wanting more Dyne, and less Dilla, 'cos there's plenty of Dilla. Which means die-hard beat-heads will probably dig the shit out of it.

Check a peek of the album here or on the BBE website.
Posted by Your Bro 90 aka David Carroll at 4:15 PM