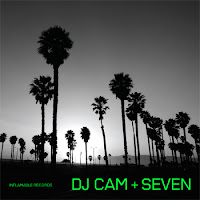 Do you remember Trip Hop? DJ Cam does, and on his latest album, Seven, the Frenchman's re-visiting the sound with which he made his name in the mid-'90s. Sort of. But it's just not the same. Trip Hop at its best (Portishead, Massive Attack, Tricky) was challenging, vibrant and alive, always looking to create something of substance. DJ Cam at his best was capable of that. Trip Hop at its worst (I can't bring myself to name names, though I'm sorely tempted...), was self-indulgent, sappy or often just plain boring. Cue Seven. Guest vocalist Chris James appears on three of only four decent moments here (Swim, Ghost and Uncomfortable), with his remarkable range, delicate touch and sheer presence providing the few rare moments of real beauty. The fourth is the CD-only bonus track, A Loop, easily one of the most exciting instrumentals on the album. Many tracks, such as Dreamcatcher and Seven, are cringingly simplistic stylistically, while others meander seemingly without direction, sometimes sounding a little like Massive Attack, or a little like James Blake, or... well, put it this way: this is Cam's seventh full-length album, and the thought put into naming the album seems to reflect the level of musical creativity present. The definition of background music.