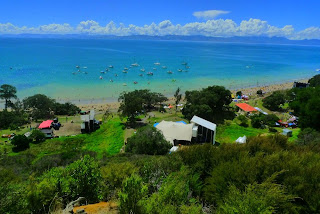 The size of the first drop suggested this was real deal rural rain. Sure enough, within seconds it'd arrived, water cascading down the hill to the main stage where Erykah Badu was holding court. Seemingly only minutes later thousands of people were desperately seeking cover in the bar, under tress, flags, awnings and marquees. A few brave souls discarded clothing and danced in togs, while others began the trek home to sodden sleeping quarters. In the glorious Saturday morning sunshine there were tales of collapsed tents, mud-caked sleeping bags and broken legs on the goat track, but that's the rough and smooth of buying into the festival vibe, I guess. Sure, there were a handful of logistical issues (the state of the portaloos and size of some of the queues at peak times), but they're minors and didn't diminish the overall experience. An experience which saw any desire to stick to a timetable cast aside early in the piece. Not only was this incredibly freeing, it meant I was able to see the Cuban Brothers, who were easily one of the funnest acts of the weekend, leading the main stage audience in a sing-a-long tribute to Whitney Houston. It also meant when the bro step and glitch hop of some DJs got a little tiresome I could embrace the full-frontal fruity-fun of the Living Lounge, where acts like Labretta Suede and the Motel 6, Macombee and the Absolute Truth and the In Flagrante burlesque dancers (which, despite being totally NSFW, are well worth a google) encouraged folks to unleash their inner freaks. Aside from the generally positive and accepting atmosphere, it was these 'second and third tier' of performers, artists and extroverts who added the flavour which engaged punters beyond the main stage, while local acts like Funkommunity, The Yoots and Lord Echo were easily the equal of the internationals. Having said that, the really big names didn't disappoint. Mostly. While a lithe and majestic looking Erykah Badu pleased the heads by playing songs from Mama's Gun and Baduizm among tracks from her more recent New Amerykah albums, hers was a set in which she captivated much, though certainly not all of the crowd. Around ten minutes before the rains came, Badu had stopped her band and launched into a monologue about oppression and occupation and the people of Mexico, something which seemed to confuse a great number of the younger audience members, who seemed to like her OK, but were eager for more. Hudson Mohawke had more. More of almost everything, except soul. His blunt trauma assemblage of sounds created walls of noise which saw a significant number of punters seriously lose their shit. Speaking of which, I heard the grassy bank above the main stage on Friday night described as 'Magic Cardboard Hill', and it's not really a festival without that sort of behaviour, is it? The quite remarkable Earl Gateshead showed the Serato-toting DJ youngsters how it's done, spinning dubplates and seven inch vinyl records while getting on the microphone to chat, bigging up the tunes, explaining the history of the riddim or encouraging us to join him in celebrating the "Heroes! Heroes! Legends and heroes who smuggled weed across borders, and through customs!". Quite. Both his DJ sets were among the finest of the weekend, alongside those by Hudge, Mo' Horizons, Spikey Tee and the Soul II Soul Sound System, with Jazzie B and Caron Wheeler who, despite some understandable sound problems following the torrential downpour prior to their set, threw down to those who remained or returned. There are many other moments which stand out, like swimming in the ocean with friends while watching Barons Of Tang work a sweltering mid-afternoon crowd into a dancing frenzy, or sharing in the crazy costumes which the majority of the punters changed into for Saturday night's dress-up theme, 'The Island Of Hooha'. From the heavily-pregnant to the SuperGold card eligible, from tourists who'd built Splore into their New Zealand holiday itinerary to girls in bikinis and gumboots - even those privileged few on yachts in the harbour, lights twinkling under Saturday's cloudless night sky - it was the people who ensured Splore 2012 was a proper party.

An edited version of this review appears in Volume magazine
Posted by Your Bro 90 aka David Carroll at 3:09 PM