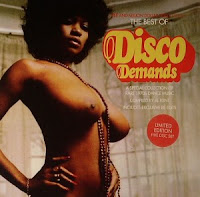 It's disco music, but not as some of you may know it: Best Of Disco Demands features all the rare disco music you could ever need - and I really do mean that, as it's an exhaustive, and at times exhausting collection. Thing is, while the full 5CD set (also available on vinyl!) is not really recommended for ingestion in a single setting, there can be little credible argument mounted against Best Of Disco Demands standing as the best disco music compilation of all time. Not for nothing is Al Kent (aka Scottish-born Ewan Kelly) revered as one of the most discerning disco selectors currently filling dance floors. Ripe old classics get the swerve as this spellbinding selection unfurls, encompassing a surprising breadth of disco sounds from African and Latin influences to house-styled four/four, from sweet soul and deep funk flavours to full-throttle, open-hi-hat floor-fillers. This is wall-to-wall quality disco music.

My review of Disco Love 2, also compiled by Al Kent, here
Posted by Your Bro 90 aka David Carroll at 5:35 PM