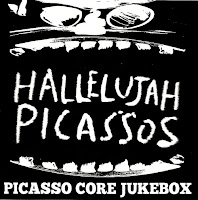 "I want to educate people to the fact there are always more possibilities than the situations you have encountered. Naivety is still so strong among people. The Picassos are about social and cultural observation." - Harold 'Roland' Rorschach, Hallelujah Picassos (1992)

I remember coming to Auckland from a rather rural upbringing in Waihi Beach, all bright-eyed and bushy-tailed, and first encountering the Hallelujah Picassos. I was gobsmacked. As a young man wanting to get my teeth into playing in a proper band, these guys blew my mind. They played reggae. They played rock. They played most everything - hard, and loud. I was sold. What's more, they hung out at what became my local: DKD Cafe. What was curious to me was they never really received their dues. Shit, there are kids worldwide right now trying to piece together what these guys did years ago! Perhaps Picasso Core Jukebox (alongside last years' originals collection, Rewind The Hateman) might address that? Probably not. That's a shame, as these guys were the real deal and even now, well over a decade later, the excitement, the genine intent, the sheer passion seeps through these incredibly diverse grooves. Imagine what this sounded like to a fifteen year old kid from the country!? It was like nothing I'd ever heard before. Scratch that. It was like everything I'd ever heard before, thrown together in an aggressive, vibrant, liberating whole. Put aside the decidedly average recording quality on some of these tracks and put yourself into the shoes of early 1990s New Zealanders as the Hallelujah Picassos tore through a set littered with these (severely) re-imagined covers alongside their own material. One of the criticisms these guys have always copped is that their records sounded like compilations. Fuck that. And fuck the Great New Zealand Songbook, while we're at it. If you want some proper NZ music history, and you want to pay respect to some of the actual originators in our scene, buy Rewind The Hateman, and then buy this. Makes me proud to be a Kiwi again.