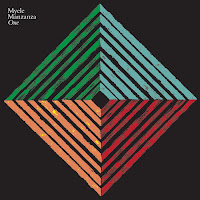 "You're a nice boy, we like you heaps... but really your drumming is unacceptable any more, OK? Bye bye for now."

I wonder if Myele Manzanza's neighbours see it as a compliment that a selection of their phone messages feature on the opening track of One, Manzanza's debut solo album? A tribute to their patience, perhaps? Patience is one thing Manzanza seems not to have. The young man seemingly moves at the speed of light, having played with everyone in NZ from Recloose to Olmecha Supreme to Scribes Of Ra. Currently one-third of "super-group" Electric Wire Hustle, Manzanza's skills as a drummer are clearly apparent. The first "proper" song here, Big Space, lays those skills out for all to see as it builds into a hard, funky, jazz freakout; while the following track, Absent (featuring the ever-compelling Bella Kalolo) gives us a glimpse into Manzanza's abilities as a songwriter and beatmaker. And it's true: he's a talented motherfucker. The blend of live drumming and programmed instrumentation is spot-on, and all of the ideas presented are well thought through and impeccably delivered, in what is an excellent debut. Having said that, instrumentals like Delay and Elvin's Brew are impressive but challenging to listen to, while the more "straight-ahead" tracks like City of Atlantis (with Charlie K and Ladi6) and On The Move (featuring Rachel Fraser), really shine - perhaps because of a more subtle hand on the production rudder. Though Manzanza himself has stated he was keen to reflect the many aspects of his musical interests, so in that regard, job well done. Other guests include Mark de Clive-Lowe, Isaac Aesili, Steph Brown, Crete Haami, fellow EWH bandmates Mara TK and David Wright, and Myele's Dad, renowned musician Sam Manzanza. As for Myele's neighbours? I reckon they'd just be happy he's spending the next few months based in Europe.