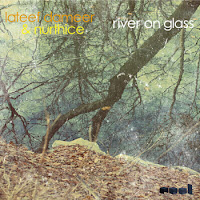 For musicians these days a good backstory is as important as your image. (Oh no, you didn't think music had anything to do with gaining people's attention, did you?!) New Yorker Lateef Dameer and Bulgarian Nurthice have a great story: Dameer was working on an album project but had hit a wall. Upon hearing a beat sent to him by MySpace mate Nurthice the project was re-ignited; only the pair found there was real chemistry between them and, despite having never met (they still haven't), they continued sending tracks back and forth - in much the same way Foreign Exchange did in their early days. While that's not where the similarites with Phonte and Nicolay's project end, it would be lazy of me to draw the comparison and leave it at that as, besides the backstory, River On Glass really is something quite special. It's made up of very short songs, most around the two minute mark. Despite this, Dameer (in apparently his first real outing as an emcee only) gets his messages across succinctly and without fuss or bother, and because of the short song lengths, the listener's patience is never tested (aside from during the $1 Bin remix of the title track - I'd argue the remixes add little value to this package). Nurthice's beats are made of loose-limbed drum patterns, layers of synths, moogy keys and squelchy bass with lashings of live-sounding double-bass, pianos and guitars, sounding at times like Deodato jamming with Dam-Funk. Highlights include the title track, with its lovely, laidback groove; the spectacularly layered My Distance; and the majestically delivered Dreamswitch, with Dameer's inspring words of self-belief atop woozy-sounding beats. River On Glass is nothing short of impressive. My only gripe is it is too short. Search, discover, enjoy.

Check the album for yourself right here or listen to the title track below - and cop a free download!

Lateef Dameer - River On Glass (Prod. Nurthice) by Lateef Dameer
Posted by Your Bro 90 aka David Carroll at 9:48 PM