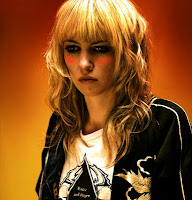 Ladyhawke's eagerly awaited new album Anxiety is about to drop worldwide at the end of the month. Originally scheduled for a late-2011 release, repeated delays have resulted in the artist otherwise known as Pip Brown spending a long time on the promo trail, talking about herself. Despite this, when I spoke with her recently she was forthright, eloquent and hugely charming.

She's a role model to thousands of young women, yet she likes to wear mens clothes. She has a massive live following and months of touring the globe ahead of her to promote her new album, yet she suffers from almost uncontrollable stage-fright. She is a world famous pop star, yet she manages to retain her realness amongst the madness.

And it has been some madness: Ladyhawke's self-titled debut solo album propelled her into a realm in which seldom few musicians exist. The singles Paris Is Burning and My Delerium were massive globally, earning her a clutch of Tuis, a couple of ARIAs and the international acclaim and attention of folks like Peaches, Kylie Minogue and Perez Hilton. She has travelled the world, playing across America and Europe, at renowned festivals such as Glastonbury and SXSW. She is signed to Modular (a subsidiary of Universal Records) and is clearly a global priority for what is an extremely powerful label.

Yet she's still the Kiwi girl who grew up in Masteron: "I've never changed who I am," she declares, "From the word go I was quite vocal about who I was and set a precedent almost. I've been quite lucky because everyone just lets me do my own thing, no-one's ever asked me to change."

She pauses, laughing: "The only time I've ever encountered people trying to change me is when I do photo-shoots, and the stylist will try to make me look really girly or something. I quite often have battles with that because it's my image I'm putting out there and the way I look is the way I'm happy looking! I get really offended, like they don't think the way I look is cool enough for their magazine or something?"

Ladyhawke's look is only one of the things Brown has firmly under control, with song-writing and studio partner Pascal Gabriel well aware of "best practice", Pip Brown-style: "He knows I like us both getting in a room and coming up with an idea together," Brown admits, "If he thinks of an idea without me there it doesn't feel right to me, I feel like I haven't been a part of it."

For someone with such a considered approach to her career, the delay in the release of Anxiety has been frustrating: "It's been finished since last year, I can't even remember when! August, or July or something!" she sighs, recalling the reasons for the long wait, "It's all the crap you have to wait for, all the red tape and label stuff. It was supposed to come out in October, I'd mentally prepared, had done a heck of a lot of promo and when it got pushed back I was like 'Oh my God!'"

Anxiety will be out at the end of May worldwide, and Brown brings her band to New Zealand in July, plating a handful of shows on a tour which also takes in Europe, the UK, Australia and the US. I'm particularly intrigued by her profile in America, as her success there is something which seems to have slipped under most Kiwis' radars. "I love touring the States," says Brown, "It's a huge place and it's a lot of hard work but it's really fun. There's a lot of support there, I've played some amazing shows and it's been incredibly positive."

Why don't we in New Zealand hear more about your success overseas? "I don't even know," Brown says, laughing nervously, "It gets brought up quite a lot, people say to me 'Why do you think people don't like you in New Zealand?'" She's laughing again, but it's awkward, "I really don't know. Maybe it's because I don't live there anymore?"

This seems to be a recurring theme among New Zealand musicians who have ventured overseas either in search of success or in order to follow a path that is being tread by Ladyhawke, or the likes of The Naked and Famous or The Datsuns. The infamous 'Tall Poppy Syndrome' is alive and well - and keenly felt.

"What a lot of people don't realise is when you've been away for a certain amount of time or you've had a bit of success, you get some really nasty comments," Brown says, "You get such cynicism in New Zealand and it weighs you down, and makes you wonder why - shouldn't everyone be proud?"

Honest words well spoken, and further proof that in a world of increasingly manufactured ready-made stars with their safe sound bites and scripted interview responses, Pip Brown has the strength of character to stand by her beliefs. Refreshingly real, indeed.

Interview destined for publication in Volume magazine - but remained unpublished due to the mag closing its' doors.

Check out my review of Ladyhawke's second album, Anxiety, here.