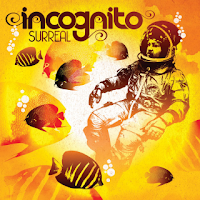 When a group has been around as long as Incognito have, it sometimes becomes difficult for reviewers to properly appraise their albums because they often have a pre-conceived opinion of the groups' sound. As I was researching Surreal, the fifteenth ( !! ) studio album from Jean-Paul "Bluey" Maunick's enduring jazzfunksoul outfit, many of the "critics" quickly defined themselves (and not always intentionally) as either a) screaming fanboys, or b) diehard haters. Straight up? I'm neither. Aware of Incognito's music and their reputation, I've enjoyed listening to them over the years, but must admit to not owning a single album of theirs. That doesn't mean I don't possess one, of course (two, as it happens), and it also doesn't mean I'm not in a position to pass judgement on this one. Harsher folk than I would suggest this kind of music is too syrupy, too earnest, too damned cheesy; but that's the thing. This is proper soul music. To some ears those sweet harmonies, thoughtful playing and beautifully constructed songs performed with real emotion seem somewhat fake. OK, so maybe some soul music is, but Surreal is not. This is classic Incognito: relentlessly funky and effortlessly soulful. Yes, it's also pretty smooth, but the band (Bluey's regular touring group) are on fire, with deliciously chunky horns, shimmering layers of keys, big fat fluid bass lines and on-point drumming complimenting an excellent selection of vocalists. Regular Incognito collaborators Vanessa Haynes and Maysa are joined by fast-rising UK soul stars Natalie Williams and Mo Brandis, all of whom lay down some extraordinary performances. Cleanly produced but with a live feel which provides just enough of a raw edge to keep it fresh, Surreal shows that there's plenty of life left in the old fella yet. No offense, Bluey. You're still looking good too, mate.