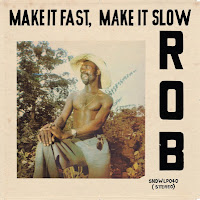 Make It Fast, Make It Slow is without doubt one of the most intriguingly weird afro albums I've ever encountered. Apparently the enigmatic Rob recorded a couple of albums during 1977 which, though released by the legendary Essiebons label, did little business locally at the time. Nowadays, of course, original copies are prized amongst collectors. The title track of this album was featured on the first of Soundway Records' excellent Ghana Soundz compilations - who are also to thank for this re-issue. A strangely psychedelic brew of afro-beat, funk and reggae, with the emphasis on heavy percussion and horns, Make It Fast, Make It Slow is a beguiling listen, with everything slowed down to treacle-speed; even Rob's vocal range is limited to a few emotive growls and grunts as he guides the listener through a strange mix of religion, philosophy and sexuality. While you could file Make It Fast, Make It Slow in the "afrobeat" section of most music stores, that label doesn't really go anywhere near properly describing the sounds found within. You know how famous old guys like William Shatner record bizarre vanity project albums which somehow actually end up sounding weirdly cool? Yeah, so Rob was never so famous, but that's the section this album belongs in. Worth searching out for the weirdness alone.