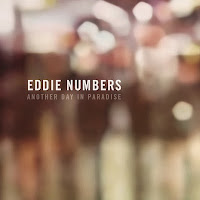 One of my Facebook friends (and, as it happens, real life acquaintances) mentioned the other day that we should define ourselves not as generation x, or y or whatever, but rather we should align ourselves with the musical genre we grew up with. His was hip hop. While I'm unsure as to what mine actually is (it can't be yacht rock, surely...?), I know it ain't hip hop. There are hip hop artists I like a lot (The Roots, Madlib, Latyrx, Foreign Exchange, etc.) but I usually steer clear of "reviewing" hip hop albums as I just don't feel qualified enough to offer strong, considered opinion. In this case though, I'm making an exception. Another Day In Paradise is the debut album from New Zealand group Eddie Numbers, and it's not strictly just a hip hop album, blending guitars, strings and layers of keys with sharp story-styled lyricism and straight-ahead micsmanship. Eddie is the frontman, and Numbers are his live band - and they're hype, laying down exceptionally-played energetic grooves for the London-born, Auckland-based emcee to grace. If The Roots are your benchmark for a live hip hop group, then you'll be feeling these guys. The over-riding lyrical themes are pretty dark though (aside from a little sharply witty hipster-baiting), touching on broken relationships, coming up tough in the city, and, er, transporting a body out to the Waitakeres in the boot of a car. Told you it was dark. Having said that, the album also contains two clear standouts: the Deftones-style Problem, which must go down a treat live; and my current favourite "hip hop" track, Never Rap Again. I'm impressed, and I can see why these guys have built up a big live following in no time at all. This album deserves the amount of hype and attention Homebrew are getting for their debut album. Get amongst.

Check out what I reckon is one of the best local tracks I've heard in a while, Never Rap Again...

Never Rap Again by Eddie Numbers
Posted by Your Bro 90 aka David Carroll at 10:31 PM