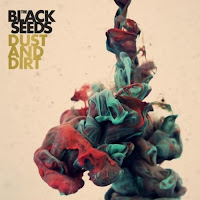 The Black Seeds are one of the Wellington bands at the forefront of what is often disparagingly referred to as our "BBQ Reggae" scene. While that's a tag a few bands undoubtedly deserve, on the strength of Dust & Dirt it's undeniable The Black Seeds do not. Without dialling up the cliches, the bands' fifth album sees their sound maturing, and the group making a genuine effort to push beyond reggae grooves - though that distinctive lope does remain a central core, particularly on "old school Seeds" songs like Love Me Now. However, it's almost as it the band consciously decided against recording an "anthem" like So True or Cool Me Down with which to climb the charts, but chose to further explore the directions hinted at on their last album, Solid Ground. There were a couple of changes which may have encouraged the experimentation: the bands' own Mike Fabulous handled production and the album was recorded in their own studio space. Either way, Wide Open and Settle Down benefit from the touches of psych-rock, and The Bend shows welcome traces of funk, with its' Stevie Wonder meets Salmonella Dub groove. The other noticeable shift may also have something to do with Fabulous (or more to the point, his solo project Lord Echo), as songs like Don't Turn Around, Loose Cartilage and lead single Pippy Pip slide into beautifully layered disco-reggae blends - and end up being some of the best tracks here. Indeed, Fabulous' production gives Dust & Dirt a sense of grittiness and real warmth which is sometimes missing from their early, often over-polished work. There's an overwhelming feeling that Dust & Dirt may be the beginning of something new for The Black Seeds, who are clearly capable of far greater things musically than their first few albums would've indicated.

Aside from investigating some of the links above, you could also check out a few tracks from the album in the player below...

The Black Seeds by Easy Star Records
Posted by Your Bro 90 aka David Carroll at 4:16 PM