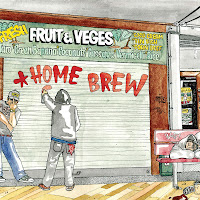 Don't believe the hype? You can't argue with the facts, bro. The debut album from Homebrew, Avondale's most infamous hip hop crew, is really fucking good. Lyrically, musically, conceptually, this is a seriously tight package, spreading its' wings over two discs. Apparently divided between 'light' and 'dark' themes, I guess it depends on your definition of light and dark. Whatever. There are few New Zealand lyricists who are better able to capture the subtle (and not so subtle) nuances of life in our country better than Tom Scott. He has a wry sense of humour and a keen eye for detail, which he allies to an always on-point rhythmic delivery. There are no lazy Americanisms here either, cuz, as he tells tales of growing up poor in Auckland, acknowledging local landmarks, laying out relevant philosophical and political arguments and exposing the underbelly of a lifestyle most of us are more than familiar with. There are so many examples, but I'm highlighting my current favourite: Good God. Tom is viciously brilliant. Check it, as it provides the ideal counterpoint to the gimmicky-sounding Benefit (thankfully the only time that trick gets played out). Musically too, the album shows a surprising maturity, with enough raw, loose and gritty to balance out the woozy, hazy and experimental. Refreshingly un-Dilla-like, the beats move between golden era boom bap, piano-laden Blue Note-referencing head-noddin' and warm, live instrumentation. Some of the guest players include Chip Matthews and Christoph El Truento, while Lui Tuiasau (@Peace), Esther Stephens, Tyna Keelan, Tourettes and Hollie Smith appear on vocals; but the plaudits due belong to Tom, Haz and Lui, aka Homebrew. They're not just a lot harder working than they'd like us to believe, but they're also a hell of a lot smarter. Who woulda thought? Yes, the album is ambitiously-assembled, but it's impressively-realised, and one of the best debuts I've heard in years. Believe the hype.

I've never been one to advocate drug use, but I am quite prepared to highly recommend you check out the track Datura below, featuring Lui Tuiasau, and taken from the above album...