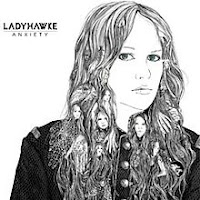 Anxiety is the eagerly-awaited and oft-delayed second (I'm from New Zealand, bro, I'm not using the word "sophomore") album from Ladyhawke. The Masterton, New Zealand-born 32-year old otherwise known as Pip Brown has seemingly nailed her colours to the mast with the title of this album - and it's true that the "second album slump" is something many musicians (and critics) are acutely aware of and, quite rightly, anxious about. Happily I can report there's no such slump for Brown, and nor should she be particularly anxious about how her new album is received - despite not really sounding very much at all like her feted debut. While the '80s influences are still present, they're dialled back big time, with gritty rock n' roll guitars (played by Brown) often outmuscling squiggly-sounding synths, and live drums (also played by Brown) edging out programmed beats. The electro-styled floor-fillers from her debut have largely been replaced by pop-rock songs with big choruses and a handful of welcome Pixies and Nirvana references. A couple of notes, though: Brown's vocal delivery sounds at times a little too removed, and she sounds just too damned nice. Not always, but often enough for me to wish she'd perhaps let her guard down an little more when recording her vocals. And, while there are some truly cracking songs here, there's no obvious chart-straddling follow-up to her previous mega-hits My Delerium and Paris Is Burning. You can decide whether or not that's a bad thing. I think it's great, and I like this record a lot.

Check out the single Black, White & Blue below, or follow some of the links above for more... aaaand you can read my interview with Ladyhawke from May 2012, here.


BLACK WHITE & BLUE by Ladyhawkeofficial
Posted by Your Bro 90 aka David Carroll at 11:20 AM